There are many men who try their best to thwart the Lord, but all of them ultimately fail.  The Muslims are among those who believe that because of their actions, the God of the Bible – in the form of the Jewish Messiah – will be kept from fulfilling prophecy.  How foolish they are!

The prophet Ezekiel spoke about the Eastern Gate to Jerusalem in Ezekiel 44:1-3:

Then he brought me back to the outer gate of the sanctuary, which faces east. And it was shut. And the Lord said to me, “This gate shall remain shut; it shall not be opened, and no one shall enter by it, for the Lord, the God of Israel, has entered by it. Therefore it shall remain shut. Only the prince may sit in it to eat bread before the Lord. He shall enter by way of the vestibule of the gate, and shall go out by the same way.”

The gates of the city of Jerusalem were named for the location to which they led or pointed.  The most important of these is the Eastern Gate, also known as the Golden Gate, the Gate of Mercy, and the Beautiful Gate.  When Jesus entered the city on Palm Sunday, he came down from the Mount of Olives, which is directly east of Jerusalem.  It was through the Eastern Gate that He entered to the acclaim of the people; from there He went to the temple to drive out those who were desecrating God’s House (Luke 19:28-48).

Notice what Ezekiel says: “This gate shall remain shut; it shall not be opened, and no one shall enter by it, for the Lord, the God of Israel, has entered by it. Therefore it shall remain shut.”  The Lord has entered it.  Indeed, Jesus did.  But then, the Word of the Lord goes further, saying that the gate will be shut and remain that way.

When the Muslims who conquered Jerusalem as part of the Ottoman Empire and overran the city in 1540 AD, they were apparently well aware of the ancient prophecy.  In their opposition to the Jews and Christianity, they buried the Eastern Gate.  Their intent was to prevent the Jewish Messiah from ever entering it.  Not only did they seal the gate in this way, they went a step further.  They placed a cemetery right in front of it.  The reason is that the Jews consider the dead as unclean.  Thus, the cemetery would keep the Messiah away so that He wouldn’t defile Himself.  Below is an image of the Eastern Gate that is sealed with the cemetery before it. 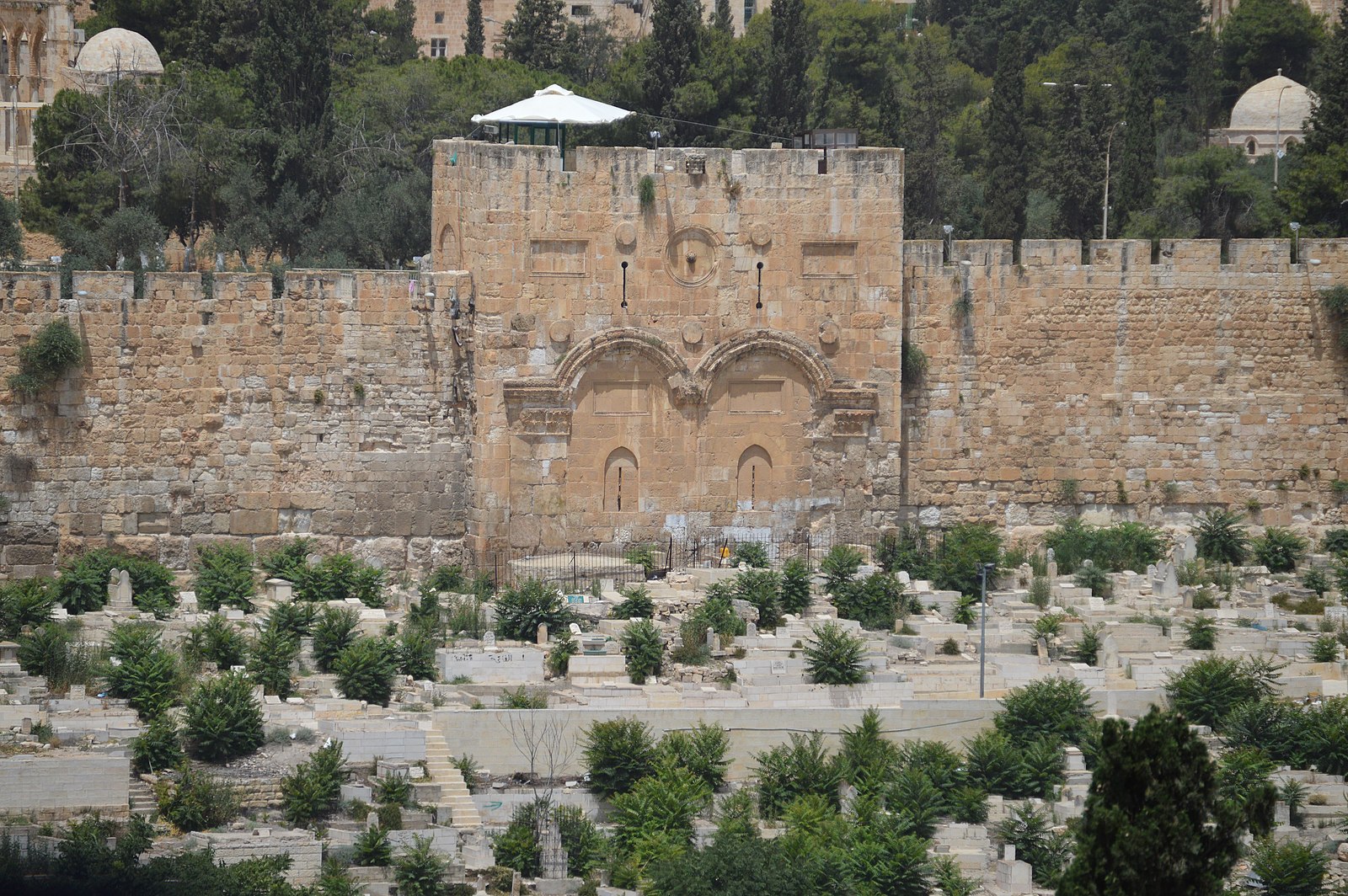 That’s not the end of the story.  The prophet also declared the following in Ezekiel 46:12:

He said that the prince will enter by the Eastern Gate.  Who is that prince?  It is likely David, who will rule over Israel under Jesus, King of all the earth.  So a day is coming when the efforts of the Muslims will have been futile.  Will Jesus also enter again by that gate?  Perhaps.  On that day there will be rejoicing as Psalm 24:7 says:

Lift up your heads, O gates!

And be lifted up, O ancient doors,

that the King of glory may come in.

Jesus – the King of Glory – entered this gate upon His first visitation.  There was rejoicing then.  When He comes the second time to rule and reign upon the earth at the end of the Tribulation for the period of the Millennial Kingdom, Jesus will quite possibly come once more through this entrance.  How the righteous will rejoice!

Those who hate the Lord labor in vain.  Jesus is already victorious.  He has risen from the dead.  He will return in glory.