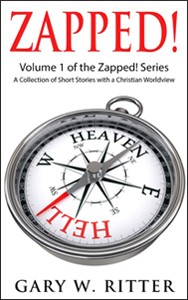 Zapped! is the first in another planned series of three e-books. Similar to The Panic series in concept and format, Zapped! is a collection of very short stories, each of which can be read in about three minutes. It’s a perfect book for someone on the go who wants to read good fiction but has limited time. As with all of Gary’s books this is written with a Christian worldview, presenting original stories based off a defined theme. Beware!  This book, as with everything that Gary writes, is NOT politically correct.

“What can we do to reduce this man’s effectiveness in the ministry; better yet, ruin him completely?”

“How foolish you are! We do what we’ve always done. We look at the man’s weaknesses, his proclivities, and use them against him.”

“This one’s a difficult case. The Enemy has said he’s a man of integrity. He even spoke that word prophetically to him.”

“He is human. He has sin from his past he’s never repented of. We’ll find it if we seek it out. We will cause him to fall. We’ll even destroy his standing with his pastor, so the man no longer trusts him and will thrust him from his ministry position.”

“That would be delicious. Let’s see, what have we got on him? How about the big one – sexual immorality? Anything there?”

“Give me a minute; this book is heavy. I’m checking the records. Nope. He did all that before the Enemy got ahold of him. He was thoroughly ours then, but he put all that under the accursed Son’s blood.”

“Okay, look for debauchery, idolatry, witchcraft. Any of those?”

“This is extremely disappointing. He’s given up all his idols and looks only to the Enemy. I shudder at the thought.”

“What about hatred, rage, selfish ambition?”

“He’s quite self-controlled and patient. His love – excuse me while I metaphorically vomit – has grown in the last year. I’m beginning to despair of how we can bring him down.”

“Oh, my goodness, look at that. I think we’ve hit on something. He has a questioning nature and he’s always thought that was a good thing. Unfortunately it can be, but what if we twist that nature to make it critical? We’ll make him call evil good and make him wise in his own eyes. We can convince him to think he’s offering constructive criticism when he’s actually causing dissent…”

Gut Feeling: “Wow! Words can’t even begin to describe all the wonderful things about this story. It’s brilliant. The choppy sentences that might normally distract me fit your MC and the atmosphere perfectly. It added to the story and to your character. That is something only a truly gifted writer can accomplish.”

Museum of Government Innovation: “This piece is so realistic that it is scary. Leave it to the children to bring truth and wisdom with their words. A creative piece of work.”

The Queen of Heaven’s Fruit: “Powerful and heartbreaking exposure of the suffering that lies beneath the surface of many of the bible stories that we too often skim over.”

Cocktail: “I loved,loved,loved this short story!  It was well written and terrifying. Your style of writing made it even more terrifying because the MC’s voice was calm and normal. Just wish I’d written it.”

“Prayer is the pulse of life; by it the doctor can tell what is the condition of the heart. The sin of prayerlessness is a proof for the ordinary Christian or minister that the life of God in the soul is in deadly sickness and weakness.”