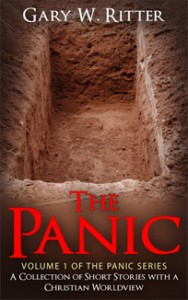 If you’re already a Christian, this book should entertain you and provide some thought-provoking moments. If you’re not a Christian, perhaps you’ve wondered how a true follower of Jesus Christ perceives the world around him. This book will give you insight into that.

Be assured: these stories are not politically correct. Perhaps some of them will surprise you. Come spend several hours. Think. Learn. Grow. Be entertained.

If I believed in God, I would have called it a revelation from Him. But since He is an abstraction, a crutch, and something conceived out of whole cloth, my revelation naturally came from within myself. It is I who conceived it, and I who made the world aware of its danger.

I was famous some years ago with a book predicting that the world was cooling. In fact, from my research, I was convinced we were soon to enter a new ice age. For some reason that didn’t happen.  Revisiting my calculations I found the minuscule error that led me astray. Did I let that stop me?  Not a chance!

It was only a couple years later that my colleagues and I discovered the real truth of the matter. The earth was warming! The challenge was so great that we knew we had to get the word out. And we did. We were scientists. Science is the greatest force for positive action known to man. When scientific research reaches a conclusion there’s no denying the consequences. Governments woke up. We began a movement that swept the globe. Countries repented. New systems of taxation were imagined, and great progress was made to combat this existential threat.

Methane: “Riveting, intense premise. This held me in thrall, and I almost missed the tie-in to the topic. Very subtle. Poignant, heartbreaking and quite foreseeable.”

The Call: “Wow – Quite the story, and although it was labeled, “Fiction” it had an authentic tone and feel to it, so suffice to say…excellent work!” “You had me convinced this was true so I scrolled to the bottom about half way through to see if it was fiction or non-fiction.”

The Panic: “Oooh! This was very good. I could easily see this as the preface to a full-length novel that picks up where this leaves off. The voice of your MC is superb and I would love to read more of this story.” “Wow, one only needs to read this riveting piece to understand why it won the precious EC award. You did a wonderful job of getting into the skin of this MC. This was just a brilliant piece of writing. You managed to reach me on so many different levels. You displayed the arrogance of the MC in such a way I was wrinkling my nose in disgust. Brilliant storytelling.”

“For the message of the cross is foolishness to those who are perishing, but to us who are being saved it is the power of God.”