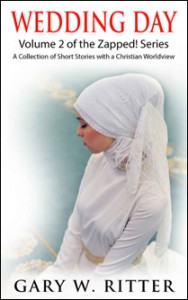 A Collection of Short Stories with a Christian Worldview

Wedding Day is the second of a planned three books in the Zapped! series, each of which contains a collection of twenty short stories. Each story is a very short read of two to three minutes. All were written in response to a Christian writing Challenge.

In this book a number of stories look at the religion of Islam from a Christian perspective. The author has studied Islam extensively for many years and reflects in the stories some of the many difficulties inherent in the religion.

As always, if you’re a Christian, this book should challenge you. If you’re not a Christian, the author’s hope is that in reading these stories, you’ll decide to dig deeper to better understand true Christianity and the joy of trusting in Jesus Christ.

From Wedding Day (the story)…

“That is the way of Islam, Malik. You will not change it or your father as long as he practices its ways.”

I had hoped that Pastor Samuel might have some way for me to stop this terrible event that Father planned, but he had no strength in the face of this religion; I had even less.

With a sad nod I slipped out of the church, checking carefully that no one saw me leave. The long walk home over the dusty road with the sun low in the west gave me time to think and pray. My four brothers and two sisters would not help; they were faithful followers of Islam like my parents. Even my mother wouldn’t – couldn’t – lift a finger. Father had every right to take another wife. Because he followed the prophet, believing every word of Muhammad as the perfect man, Father also believed that taking a child bride was a righteous act.

I found it disgusting that this little girl Father would marry was only nine, barely four years younger than me. Aisha’s parents had willingly agreed to give her away at the price Father offered. How a god could justify these actions made me want to throw up. In the last year my eyes finally opened and I became the only follower of Christ in my family. Because of the danger not one of them knew.

Our growing family necessitated my sharing a bedroom with my next oldest brother. I was the youngest and often made fun of because I didn’t aspire to killing infidels. None could understand how I wanted to study medicine and save people’s lives as a doctor. Privacy was always rare, but I had the bedroom to myself briefly. With a practiced move I slipped my Bible from my backpack into its hiding place.

The next day brought the dreaded event. Aisha’s parents delivered her to the local mosque where the wedding would be held. No one else appeared to see the fear in her eyes or her trembling hands. Women, girls: all were nothing but objects to be used and Aisha, young as she was, was no exception…

Wedding Day: “Thank you for your penetrating portrait of two young lives. It was one of those ‘wow’ pieces for me.”

Conviction: “Powerful and timely message – despite its “shameful” lack of political correctness.”

Chocolate: “I absolutely loved this story! I didn’t expect the ending so it made me cheer out loud!”

Much Anticipated: “This is brilliant. You do a stunning job of pulling me in by building the suspense. I loved all the little conflicts throughout the story, but the ending was the best of all. I love it when I don’t see a twist coming. It doesn’t happen often, but you did it. Outstanding and one of my favorites.”