The timing of the 7-year Tribulation and the unfolding of the plagues have come under scrutiny in recent years with differing views from that proposed in the past.  It used to be among the pre-Tribulation crowd (of which I am one) that a Traditional understanding prevailed.  Subsequently, a Modified version of that came on the scene.  Recently, what I call the Salus Alternative has made its way into consideration.  The attached diagram illustrates these approaches at a very high level. 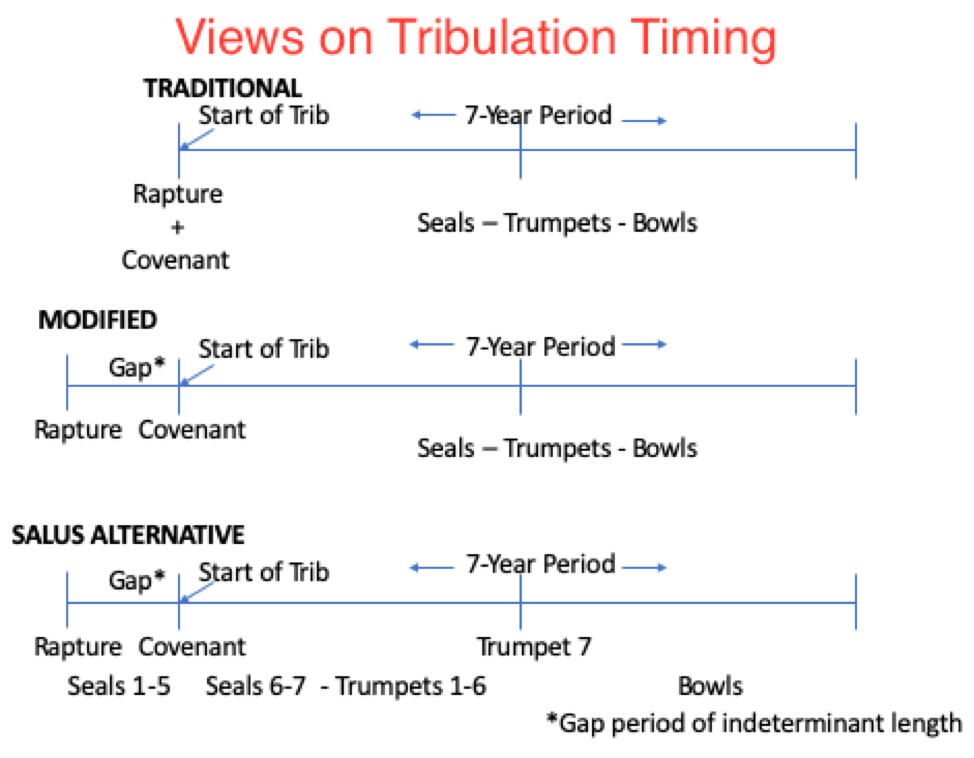 The intent of this essay is to briefly comment on these three views and to point toward the Salus Alternative as the one that has begun making the most sense to me.

The Traditional way of considering Tribulation timing has been around for many years.  Its basic premise is that the beginning of the Tribulation starts not only when Israel signs the Antichrist covenant, but also immediately at the Rapture, i.e. these two events occur relatively simultaneously.  The three sets of judgments and their timing as to when they are unleashed are not at issue in this discussion.

“And he shall make a strong covenant with many for one week, and for half of the week he shall put an end to sacrifice and offering. And on the wing of abominations shall come one who makes desolate, until the decreed end is poured out on the desolator.” (Daniel 9:27)

It became apparent to Biblical scholars that one of the issues in regard to the Traditional view is that events take time to develop in the world.  One of the questions that began percolating in my own non-scholarly brain was how so many things could happen immediately at the start of the Trib period?  How was it that at the Rapture, with the departure of the Holy Spirit causing lawlessness to arise, the Antichrist could immediately burst onto the world stage to bring about the covenant?  Where does Ezekiel’s War fit into this timing?  (I’m not specifically dealing with that here, but it is relevant.). Would all the Trib events work given the Rapture in such close proximity to its beginning?

As I began studying this, I noticed a new theory come about.  What I call the Modified view took some of these (and probably more) ideas into account and postulated that there needed to be a Gap Period between the Rapture and the start of the Tribulation.  Such a scheme helped account for the way the world works.  Typically, political figures don’t arise overnight whereby they can negotiate a significant peace treaty.  The Gap provides the time for Antichrist to become known in some way and to somehow gain a position of trust so that he can be the key figure bringing the covenant parties together.  Whatever other events that logically work better by having a time period separating the Rapture and the beginning of the Trib can also take place in this scenario.  Again, think Ezekiel’s War and the prophetic items that must be properly dealt with, i.e.  seven years of cleanup and burning of war implements, assuming you don’t place the war inside the Trib period as some do.  This war, occurring before the Tribulation with its significant clean-up efforts, makes most logical sense, in my estimation, if it happens at least 3.5 years prior to the Trib’s beginning.

Then those who dwell in the cities of Israel will go out and make fires of the weapons and burn them, shields and bucklers, bow and arrows, clubs and spears; and they will make fires of them for seven years, (Ezekiel 39:9)

Why is it logical?  Because once the Antichrist desecrates the temple at the midpoint and the Jews are persecuted by him, no clean-up efforts will continue in Israel.  It has to be finished by that 3.5 year mark.  Thus, this war easily precedes the Trib by that same amount of time.

Personally, I gravitated to the Gap period understanding pretty quickly.  It simply made more sense and answered some of the questions I had.

All was good until Bill Salus came along and upset my apple cart.  I first ran across him with his book Psalm 83: The Missing Prophecy Revealed.  It intrigued me and simply made a lot of sense by answering some questions that were previously unanswerable.  With that, I became a believer in the Psalm 83 war.

As I read subsequent books by Salus, what I appreciated most was his out-of-the-box thinking.  Just because something was thought of as the way, because that’s how it had always been, didn’t make it right.  Salus was willing to tackle tough subjects, where minds had been frozen into one way of thinking, and shake up the paradigm.  In reading the most recent of Salus’ series of books on the remaining Biblical prophecies still to be fulfilled, The Last Prophecies, it seemed like it might be useful to provide this summary article outlining the paradigm change.

That is certainly what Bill Salus has done in what I’m calling the Salus Alternative to Tribulation thinking.  As you can see from the above diagram, what Salus proposes is REALLY out-of-the-box.  He suggests that after the Rapture, in the Gap Period before the Tribulation begins, the first five Seals are unleashed.  Thus, in that Gap the Four Horsemen of the Apocalypse, i.e. the Conqueror, the Conflict, the Scarcity, and the Death would reign, plus a group of martyrs would come before the throne of God and cry out, “How long!”  This would take us through Revelation 6:1-11.  So as not to rewrite his book, I’ll let you read it yourself to glean the rationale.

Adding my two cents into the equation, if the covenant is initiated following these initial Seals, then interestingly, at its signing, there is great cosmic disturbance with the perhaps-simultaneous Sixth Seal.  Does the timing coincide with the promise of Genesis 12:3, where those who bless Israel are blessed and those who curse her are cursed?  This appears on the surface as a blessing for Israel, but God knows it’s actually a curse.  Is there an Eye to Eye consequence, as Bill Koenig argues in his book that examines the history of this phenomenon?

Within the first half of the Trib period, Salus suggests that Seals six and seven plus Trumpets one through six are unleashed.  This covers Revelation 6:12-17 and Revelation 8:1-13 – 9:1-21.

In this timing view, the seventh Trumpet is sounded at or very soon after the midpoint with Antichrist’s temple desecration.  Significant activity occurs in heaven following this, then the first Bowl is poured out with the loathsome sores.  Again, I add my personal speculative questions.  Does Antichrist get these boils?  Is there a possible symbolic connection with the Sixth Plague on Egypt with these sores?

The Egyptian plagues were supernatural events in which God demonstrated His superiority over the pagan gods and disrupted their concept of cosmic order that Pharaoh was supposed to control.  Those Egyptian gods had territorial jurisdiction over Egypt.  The Egyptian priests were severely afflicted with the sores—incapacitated—which meant they were unclean and couldn’t perform their priestly duties.  Thus, God with this particular plague stifled their ability to worship their gods in their temples.  He showed that these gods were feckless.  Yahweh ruled the earth and could do what He wished.

With the Antichrist having proclaimed himself as god above all and worthy of worship, does Yahweh immediately prove that Antichrist is no such thing?  Is he incapacitated with boils and unable to further demonstrate how wonderful he is as this deity he claims to be?  Antichrist is effectively claiming to be god of the world.  Is this Yahweh’s way of sticking it to Satan who rules behind Antichrist that his ambitions are in God’s hands?  There is no territory in heaven or on earth that God does not reign supreme.

The Salus Alternative view continues with the concluding Bowls all being associated with the Great Tribulation, and effectively, the only judgments in the second half.

When I first encountered Salus’ arguments, the problem I had was in my thinking that all of the judgments must be restricted to the 7-year Tribulation.  In other words, the first five Seals had to occur after the covenant was signed along with all the others.  But the issue that convinced me this could be a legitimate alternative was that nowhere in the text of the Old or New Testament does it say that.  We only know that the Tribulation lasts seven years and begins with the covenant.  Everyone has just assumed all judgments must be contained within the defined Tribulation period.  It’s entirely possible that the first five Seals could be part of the incredible increase in lawlessness that we know will happen once the Rapture occurs, yet prior to the actual Tribulation.  Maybe these Seals are the specific reason for the lawlessness as it develops.

There could also be the potential intriguing connections that I’ve outlined, in which God makes some other very specific points to those who are paying attention.

I hope this essay has gotten you thinking.  That’s a value I see in writing and publishing for a wider audience.  You may end up agreeing or disagreeing with Bill Salus and his thesis and/or me with my minor additional points.  Ultimately, what all of us should be doing is taking the basics and warning the unbelieving world of God’s wrath and judgment to come.  We can use prophecy as an evangelistic tool.  For those of us who have a grasp of it, that should be why we think on these topics and communicate them.  Let’s use our knowledge and point others to the One who saves and delivers us, for He is our Blessed Hope.