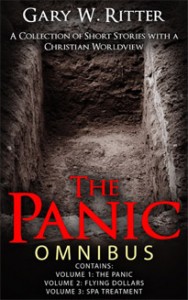 The Panic – Omnibus is comprised of three volumes that were each published separately: The Panic, Flying Dollars, and Spa Treatment. The Omnibus brings these individual books together for a comprehensive reading experience. The first fifty stories were written in response to a Christian writing challenge contest over the course of a year. Each is a very short read of only two to three minutes. The remaining ten stories were not part of the Challenge but were written in the same timeframe. Inside this book you’ll find an eclectic range of fiction from drama, suspense, humor, social and political commentary, to take-offs on Biblical stories.

Excerpt From “Of Mice and (Super)Men”

As he aged Carlton Maze grew weak and frail, prone to illness, broken bones, and afflictions he swore as a young man he’d never tolerate. It seemed he spent more time in the doctor’s office than in his apartment at the retirement community. He and his wife had moved there to “enjoy the best life has to offer,” as the promo read. Rather, he found that his fellow residents were as aged and decrepit as he was; worse, most came preparing to die. It was the most depressing place he could imagine, but what could he do? His father in his elder years long ago told him, “Growing old is not for sissies.” Carlton couldn’t agree more.

He was seeing his doctor for the third time that month to test the progress of his prostate cancer. Dr. Bowen gave him the hormone therapy shot, which arrested the testosterone in his body and inhibited the growth of the cancer. It had worked up till that point to a degree, but Carlton hated the side effects. He had been strong in his youth, glorifying in the muscles he’d earned from working on the family farm and later that he’d honed on the barbells in the gym. The hormone he took for the prostate treatment made his breasts grow and sag. He’d look at himself at the mirror and want to vomit. Could he be any less of a man?…

“From one man He made all the nations, that they should inhabit the whole earth; and He marked out their appointed times in history and the boundaries of their lands. God did this so that they would seek Him and perhaps reach out for Him and find Him, though He is not far from any one of us. ‘For in Him we live and move and have our being.’”