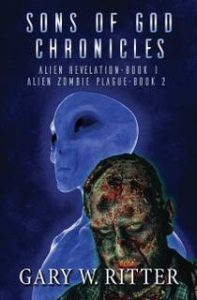 When Kari Shelton experiences an alien abduction, her life turns upside down.

Aliens have ruled the earth since World War II, but Kari’s encounter changes everything she’s believed. No longer is she ambivalent about the Watchers’ religion. She becomes a fervent worshiper of the Nine Mighty Ones, the greatest of these aliens, who are helping mankind, restoring the harmony of the earth from the distortions caused by malcontents, and enabling humans to evolve into gods like the Watchers.

Kari’s beliefs are challenged when a close friend questions the intent of the aliens and how benevolent they truly are toward humanity. Against her better judgment, she engages in pursuit of an object that puts her at odds with the Watchers. Chased by Nephilim, their giant hybrid offspring, Kari must make a final decision as to where her loyalties lie. Behind this quest is the secret of the Watchers. Making the wrong choice will cost Kari her life.

To read an excerpt, visit the Alien Revelation book page.

These two elements collide in a riveting story of our world with an alternative history since World War 2, where earth was ruled by Watchers and corrupted by their wicked Nephilim offspring.

Nick and Ellie, brother and sister, seek to uncover rumors about the zombies that are appearing all over the globe. With the help of a Chinese researcher, Tzeng, from the lab where a virus has been created to turn humans into the undead, Nick and Ellie confront Nimrod, a mastermind Nephilim who plans to rule the world by deposing the alien gods that dominate mankind.

When the zombie plague spreads, can these three humans stave off the mighty Watchers and the treacherous Nimrod in his quest? Or will the world succumb to a soulless existence?

Alien Zombie Plague continues the Sons of God Chronicles begun in Alien Revelation. Will the forces of darkness succeed in tearing down all that God has made good? Learn the startling answers in this thrilling sequel.

“O my God, incline your ear and hear. Open your eyes and see our desolations, and the city that is called by your name. For we do not present our pleas before you because of our righteousness, but because of your great mercy.”