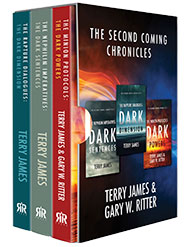 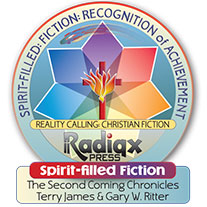 The Rapture Dialogues – The Nephilim Imperatives – The Minion Protocols

WHAT ARE SATAN’S PLANS FOR THE END TIMES?

How do the rulers, authorities, cosmic powers, and spiritual forces of this present darkness play into the chaos and terror that are coming our way?

Does humanity stand a chance against these overwhelming odds arising from the pit of the demonic realm?

The Second Coming Chronicles brings the answers to these questions and more.  This award-winning Christian Spirit-Filled Fiction Box Set includes Terry James’ popular The Rapture Dialogues and The Nephilim Imperatives, along with James’ newly co-authored volume with Gary W. Ritter, The Minion Protocols.  Join authors James and Ritter as they explore the odds humanity faces as mankind nears the Rapture of the Church and the subsequent 7-year Tribulation.  These are the days of Noah and Lot.

The Rapture Dialogues – by Terry James

What is the U.S. Government covering up from the 1947 Roswell UFO incident?  How do UFOs and alien beings play into Bible prophecy in the most evil way possible, even in the 9/11 terror attacks on the World Trade Center in New York City?  The Rapture Dialogues provides the answers.

USAF fighter pilot James Morgan finds himself at the center of a supernatural conflict that embroils his family in clandestine governmental intrigue of a terrifying dimension.

Mark Lansing, a young marine fighter pilot finds his life intertwined with the plight of the Morgans when he falls for their daughter Lori.  He’s soon confronted by hellish creatures and explosive involvement with Israel’s spiritual and physical wars for survival.

The Nephilim Imperatives – by Terry James

Satan’s sinister plan for mankind has moved into high gear.  The fate of the planet hangs in the balance through a paradigm shift of epic proportions.

Siblings Clark and Morgan Lansing realize they are caught in a generational plot to unleash supernatural terror upon the earth at the dawn of the new millennium.  For decades, supernatural beings have worked to infect the human bloodline and afflict humanity even as their fallen brethren did in the antediluvian ages.

Will Clark and his sister discover the secret behind the dark sentences that are being decreed for the human race?  Can Clark and his friends thwart the luciferian intentions to once more genetically alter man’s very DNA?  Discover the heart-pounding answers in The Nephilim Imperatives.

Will the dark, shadowy forces of evil win their perpetual war with the One who created them?  Until they destroy God’s crowning achievement – humankind – and ascend to His throne, the rebellious spiritual beings in the demonic realm will never rest.

Through a chance encounter, Clark Lansing learns of a fearsome Dimensional entity named Selaphiel.  This leads Clark to pursue the most dangerous story of his journalistic career.

From a trip to Israel where he observes advanced technologies, to the Pentagon where demonic spiritual powers assist a secret military project, to a research facility in Colorado which the next world ruler inhabits, Clark’s life grows increasingly at risk.

An elitist Deep State group conspires to thwart Clark’s plan to expose its wicked objectives.  Aligned with Selaphiel, the G7 plots its rise to planetary dominance, all the while engaged in sexual trafficking for the pleasure of its members.

As the human and spiritual evil closes in on Clark bringing danger to his loved ones, he receives unexpected help from a mysterious person in government named Q.  Plans and counterplans climax in this dramatic final book of Terry James’ epic Second Coming Chronicles.

They sacrificed to demons that were no gods, to gods they had never known, to new gods that had come recently, whom your fathers had never dreaded.