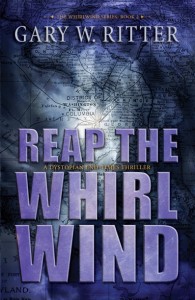 Pastor Bob Sanders has been caught up in the nightmare of America turned into an Islamic nation. Imprisoned for his faith, he endures the ultimate test as a follower of Jesus Christ: intense persecution and suffering. Sanders’ captors declare he must convert to Islam or die.

Meanwhile, Pastor James Glazier travels at God’s direction preaching the Gospel and warning of His imminent wrath. In the midst of many trials, he risks his life and the lives of those he loves to bring his prophetic message to those who least want to hear it.

Because God is sovereign, He has many surprises in store for both His disciples and for those in opposition to His will.

Colonel Hussein glowered at Major Trask. “Do you think we’re playing games here, Major? What about my orders do you not understand? Are you not to make converts to Islam? Why are so many prisoners proclaiming Christianity who had no faith before coming here?”

“I can’t explain it, sir.” Trask had feared this day as he’d witnessed many homosexuals and atheist militia prisoners become Christians. His charge from Colonel Hussein was perfectly clear: Do whatever it takes to turn the men and women in the camp into good little Muslims. Women in their separate quarters hadn’t declared Jesus Christ as their Savior in anywhere near the numbers of the men. Presumably the infestation came from within the male contingent.

Trask said, “I don’t know what it is about Christianity that makes the prisoners join the ranks of that sect and resist our persuasion. The only common denominator I can determine is the one prisoner who won’t shut up and stop practicing his faith: Sanders.”

“What are you doing about him? What’s the problem?”

“Sir, you know we had him in The Coffin, then in The Hellhole. For the last several weeks, as you’re aware, we quartered him with a homosexual prisoner and forced them to read the Qur’an and pray to Allah as prescribed by the Prophet Muhammad, peace be upon him.” Trask forced his body not to shiver. Oh, how he hated that phrase! Taking a deep breath, he looked Hussein in the eyes and continued. “But he used his time in The Hellhole to preach to the atheist homosexuals that surrounded him. Apparently he inspired many of those men to become Christians. They’ve gone on to tell others about what Jesus did for them. Rather than squelch any desire for the Christian God, it’s spread like wildfire. It also appears he’s gotten around our dictates in the time he’s spent together with that homosexual he befriended. They’re doing what you commanded them to do, but Sanders uses the time outside of the three hours a day for Islam practices to teach the other man about Christ.” Trask threw up his hands. “What am I supposed to do?”

“You’re supposed to follow orders! Perhaps, Major, you hold the wrong rank. Maybe you would function better as a captain, or even a lieutenant.”

Grieved as Trask was by Colonel Hussein’s threatening words, he stood straighter and forced out the proper words. “That’s not necessary, sir. I have a new idea for this camp. We should put the prisoners to work. Their daily effort should be so intense that they’ll break under it. By putting every man and woman in this place under forced labor, none of them—particularly Sanders—will have any opportunity to think for themselves, let alone speak to others about Christianity. We will break them.”

Hussein’s head snapped back. His eyes narrowed, and he took on a pensive look. “What do you suggest for the first project?”

“Let’s have the men build a new runway in the middle of the forest. We’ll give the women another equally useless project.”

“We already have a runway, Major.”

“With all due respect, Colonel, that’s the point.”

Air Force One flew high above the war-torn city. It didn’t matter what altitude they tried on the flight over, roiling storm clouds had made the flight a rocky one. Ibrihim Sufyan would have liked a closer look over some of the more devastated sections, but with President Abu Saif on board, such an action was imprudent, particularly with the driving rain propelled by gusts of gale-force winds.

Toledo, on the eastern edge of FEMA District 3, had been particularly difficult to bring under the control of the new Islamic government. It was one of several cities that had resisted and were involved in armed opposition conflict against numerous allied militia units. Today the president and his aide planned an on-the-ground examination and assessment. It was somewhat unusual for the president to come along on reconnaissance of this nature, but that morning he’d insisted. It was only later on the flight that he’d confided in Sufyan his reason for coming.

“My wives are driving me crazy.”

“And this is your reason for coming into this dangerous area in this weather?”

Sufyan shook his head. “Surely there might have been other means?”

Whenever the clouds parted, Saif studied the landscape below through the reinforced window of the plane. “I wonder how Muhammad handled the many women he had? At least eleven wives and only Allah knows how many concubines. And then, according to the Hadith, to have the sexual prowess to visit at least those eleven in a single night because he had the stamina of thirty men. But marriage is so much more than this. The interactions! The petty intrigues! The alliances! They’re all so jealous of each other it drives me crazy. And this is with only four wives. Imagine having eleven and dealing with this nonsense every day. I have great admiration for Muhammad, peace be upon him, that he kept his sanity.”

“My sympathies, my president and my brother. It is one reason I have never married.”

The pilot had instructions to land in a safe zone outside the city. Regardless, Sufyan worried that the rebels might see their aircraft and attempt a spontaneous offensive. They had a seemingly inexhaustible supply of military grade weapons, including rocket-propelled grenades and .50 caliber firearms. The RPGs could easily take down a plane in flight and were being used by the militia to great effect in their insurgency.

This airfield for government forces had been shelled numerous times and patched repeatedly to enable large birds like Air Force One and others to make necessary landings. There was a constant need to ferry in more troops and supplies against an enemy who wouldn’t quit and continued to hold out despite the constant effort to eradicate them and bring them into submission to Islam.

Once off the plane, the two men ran for cover into an armored Hummer and soon met with the general in charge of the Islamic forces, Walid Jabbour. General Jabbour saluted and stood ramrod straight with eyes focused in the distance at the introduction to President Saif. Great rolls of thunder rumbled overhead. Sharp spikes of lightning charged the sky outside. Rain pelted down against the windows so hard that Sufyan wondered if it might break through the glass.

“At ease, General,” Saif said. “Tell me about the fighting. Why have we not been able to overcome the enemy?”

In reply, the general first scowled. “They are devious, these militias. They have adopted the tactics of the guerilla, never bunching up in one area, slipping in and out of our red zones to kill our men and to plant landmines in unexpected places. They slither away like invisible snakes after inflicting great harm to us with little injury to themselves. To tell you the truth, sir, it has been very frustrating. They hold their ground and we seem to be in constant retreat.”

At this report, Saif seemed to recoil. “You mean the armies of Muhammad cannot overcome the infidels? How is this possible?”

Standing next to his boss, Sufyan saw his muscles tense and his fingers twitch. He knew trouble was coming, as he’d seen this same response a hundred times before, never with a good result for the one who curried Saif’s displeasure.

The general clamped his teeth together hard before loosening them and replying. “We have captured a few of the enemy.” He closed his eyes for a moment before continuing. “They claim they are on the side of the God of the Bible.”

“Do you mean,” Sufyan interjected, “that they have Him on their side?”

“No. They specifically say they are on His side. One of them explained that because they have joined this God on His terms, they are invincible as long as He wills it.”

The president spat on the ground near the general’s feet. “What garbage! It’s not possible that you believe this?”

General Jabbour kept his eyes averted. “No sir. But, it doesn’t matter what I believe. What this prisoner said spread like wildfire and our men believe it. Their faith has been shaken and many have lost the heart to fight.”

By this time Ibrihim Sufyan was also furious. “What have you done with these disloyal dogs?”

“I have made an example of them, but it seems not to have made a difference. The rebel forces have gained great stature in the eyes of my men. It has made the fight quite difficult.”

“Stay right there,” Saif said to the general. He grabbed Sufyan by the elbow and led him a short distance away into another room of the general’s barracks. “This is untenable.”

“I agree, Mr. President. This man obviously cannot lead his troops.” They discussed the situation for several minutes and returned to where General Jabbour stood with an unhappy expression on his face.

Saif snapped his fingers at Sufyan who inclined his head in assent. “Walid Jabbour, you are relieved of your duty and stripped of your rank. The armies of Islam do not accept defeat at the hands of those who follow this false God of their Bible. We will reclaim this city, and its people will submit to Allah.”

Sufyan ripped the general’s patches and medals off to humiliate him. And well he should be. He threw them on the ground and crushed them into the dirt. With a quick motion, he gestured to several military personnel who stood at attention some distance off. “Take this man to the brig.”

Over the next several hours, they promoted the next in command after assuring themselves that his attitude would be superior to that of his predecessor. Late in the afternoon, they headed back to Air Force One in the reinforced Hummer. If possible, it seemed as if the fury of the storm had actually intensified. Just as they were about to board for their flight home, Sufyan heard the whistling overhead of an incoming RPG and scanned the sky in alarm.

“O God, do not keep silent; be not quiet, O God, be not still. See how Your enemies are astir, how Your foes rear their heads. With cunning they conspire against Your people; they plot against those You cherish. “Come,” they say, “let us destroy them as a nation, that the name of Israel be remembered no more.”